The Content is The King — Part 2: Elvis’ Pink Cadillac & his Other Cars 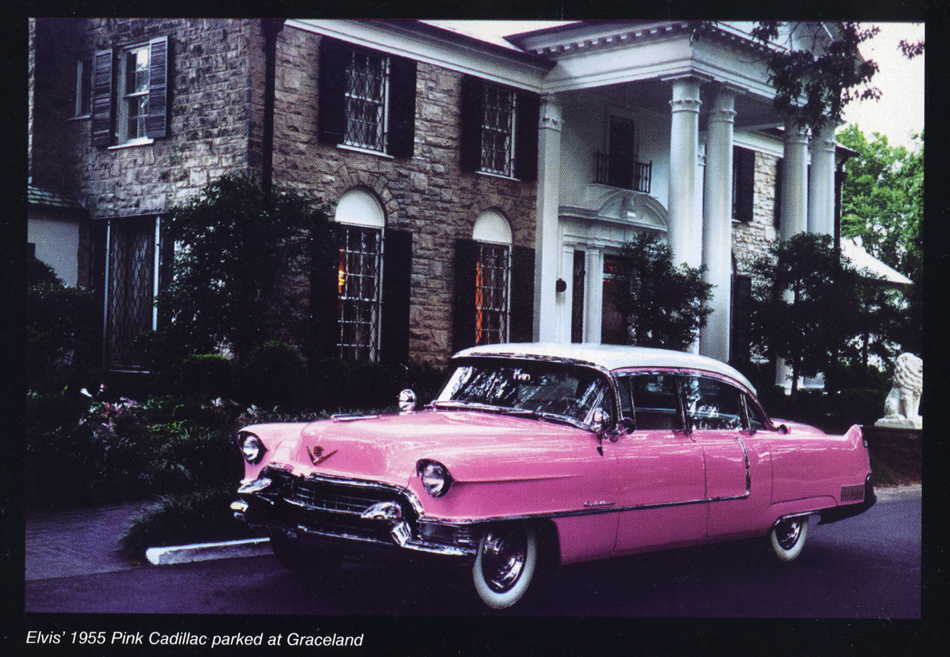 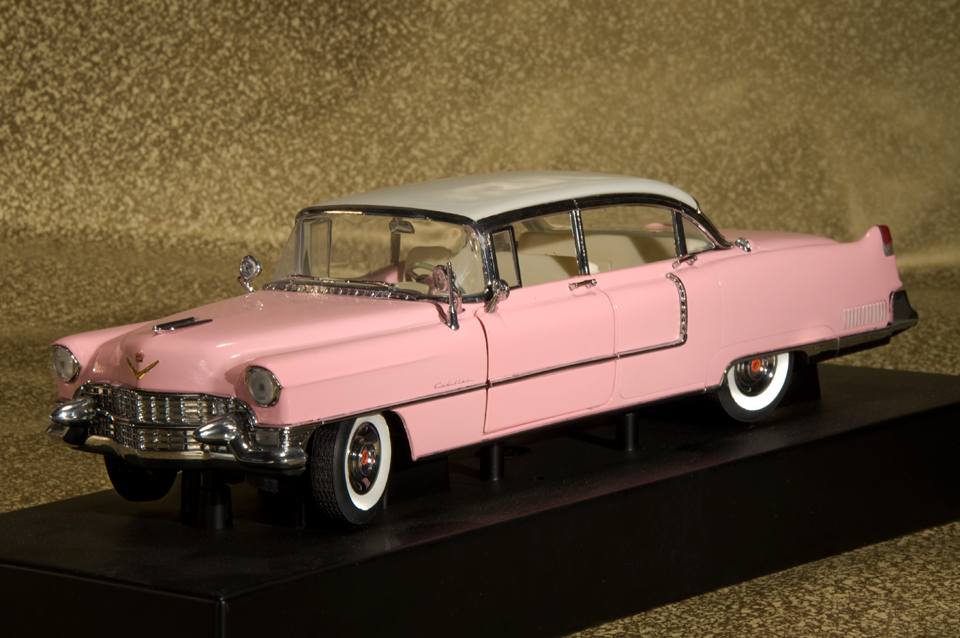 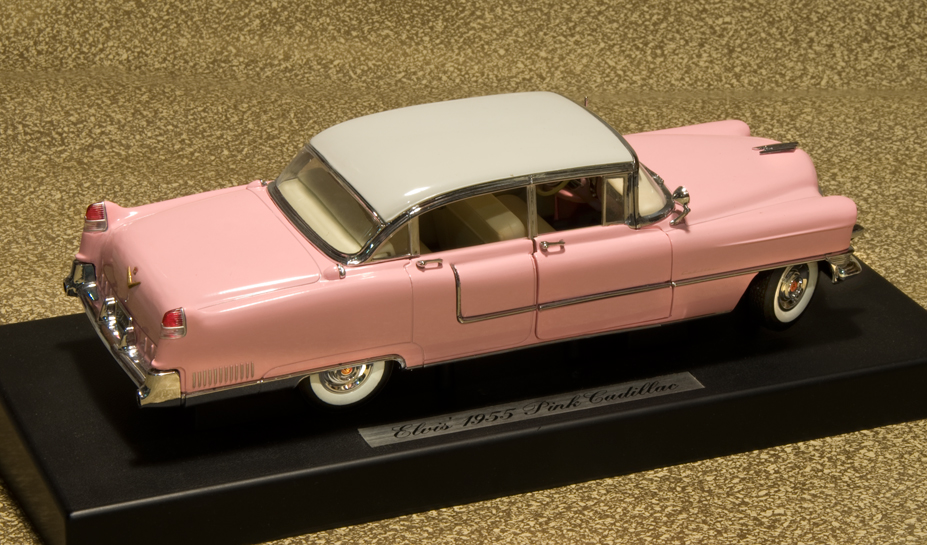 The Content is The King — Part 2:  Elvis’s Pink Cadillac & his Other Cars

The Pink Cadillac Was Alabaster Gray

In the Fifties, few things symbolized success and the American Dream more than a magnificent automobile. Elvis Presley’s affinity for the Cadillac was real. His love affair with his 1955 Cadillac was well documented and his reputation for collecting cars well deserved.

Though he owned and gave away many different kinds of cars to friends and to total strangers, his 1955 pink and white Cadillac Fleetwood is said to have been his favorite. It has become one of the ultimate icons of Elvis and the 1950’s and it is arguably the most famous car in the world.

Assembly was started by General Motors on May 20, 1955. When complete it was shipped directly to Memphis. And it was a beauty. The stretches of gleaming chrome were magnificent. From its wide whitewall tires to its egg-crate grille this car was the symbol of the fifties. Its .331 cubic inch, 250hp, 8-cylinder engine made it not just a beautiful car, but a powerful one as well. And at a list of $4,342.32, it was a handsome price for its day. This was the 60 Special, the model that had a wheel base 4″ larger than the standard sized coupe or Eldorado.

Looking today every bit as enticing as the day it was made, it has about 79,000 miles on it. And while we can’t account for every mile, some of the mileage is attributed to Elvis’ generosity…as he gladly lent the car to family and staff whenever the need arose.

Never one to settle for “plan vanilla” when there was a more glamorous option available, the 1955 Pink Cadillac Elvis drove was loaded. It had some fanciful options, for the times. Many were accessories that today we expect to be standard.

For instance, the heater and air conditioning were optional. And at the time, air conditioning cost $575. Also an extra, were the spot lights, one on each side of the car which were remotely operated from the inside. And while FM radios were not yet available, this model had an optional AM radio. The car had some of the latest technological features like an automatic headlight dimmer. In fact, if you study the MRC replica car I’ve photographed and provided for your entertainment, you’ll see the dimmer sitting on top of the dashboard. And while the Cadillac had power windows, the front and rear “vent” Windows still had to be cranked by hand. The car came standard with five blackwall tires, Elvis’ had whitewalls which added $45.70 each. It is interesting to note that at that time, the spare was not only full size but came with its own hub cap…a far cry from the four tires and a “donut” in today’s autos.

When the car was bought by Elvis it was alabaster gray. Elvis wanted pink. He reportedly delivered the car to the custom painters along with cans of Studebaker pink paint.

While Elvis’ mother, Gladys, neither drove nor even had a drivers license, this was her favorite car. This was also the one car that Elvis said he would always keep, and did. It is among the cars on display at the Elvis Presley Automotive Museum at Graceland.

Elvis owned other Cadillacs as well, and they are as much a part of the Elvis legend as sideburns, guitars and screaming girls. One is a 1960 Series 75 Cadillac limousine that was customized with gold plated interior gadgets and exterior paint made with pearl, diamond dust and Oriental fish scales. It was more of a promotional tool than a personal vehicle. It went on a charity tour in the sixties, and was donated to the Country Music Association Hall of Fame in Nashville in the late seventies.

As you can tell, many of Elvis’ autos had stories attached to them that have become part of the Elvis legend. A couple of stories surround a white 1956 Cadillac convertible that Elvis had painted a custom purple. Elvis supposedly specified the shade by squashing a handful of grapes on the fender. It is said that the customizers, after painting the car custom purple, sprinkled grape Kool-Aid on the carpet so that it would ‘smell purple’ when delivered to Elvis.

The other story associated with the purple Cadillac took place when Elvis went in to buy the car. The salesman, not recognizing Elvis, and just seeing this kid with sideburns and loud clothes snubbed him, figuring he could not afford to buy the car. Elvis reportedly went outside and introduced himself to an older gentleman who was washing cars on the lot. After asking the man what he was being paid to wash cars, Elvis had the man accompany him into the dealership. Elvis bought the car and told the manager he wanted the old gentleman to have the commission the rude salesmen would have gotten. Elvis drove that car about a year and traded it in. It has been restored and is owned by private collectors. It is on indefinite loan to Graceland.

Elvis and His Other Autos

Next to the Pink Cadillac, a 1956 Continental Mark II was the car that Elvis kept the longest. Elvis was photographed in it many times. One of these photo opportunities occurred when he was on a date with Natalie Wood. It is on display in Graceland.

In 1970, Elvis bought Priscilla a gift of a 1971 white Mercedes Benz 280 SL Roadster. Priscilla drove the car for a long time. She sent it from her home in California to Graceland for permanent display in 1989. The car has a detachable hardtop and a ragtop as well. (This Mercedes is shown on my previous post “The Content is The King” listed in the sidebar.)

Among the other cars Elvis owned was a 1973 Stutz Blackhawk (of the Stutz Bearcat fame) purchased in 1974 for $20,000. It had 18-karat gold plated trim throughout and a red leather interior. Elvis drove this car to the dentist for an appointment on August 15, 1977, and returned to Graceland that night. He died less than twelve hours later. The last time he drove through the gates of Graceland, he was at the wheel of this car.

(This black beauty is shown in my “The Content is The King” post, listed in my sidebar.) 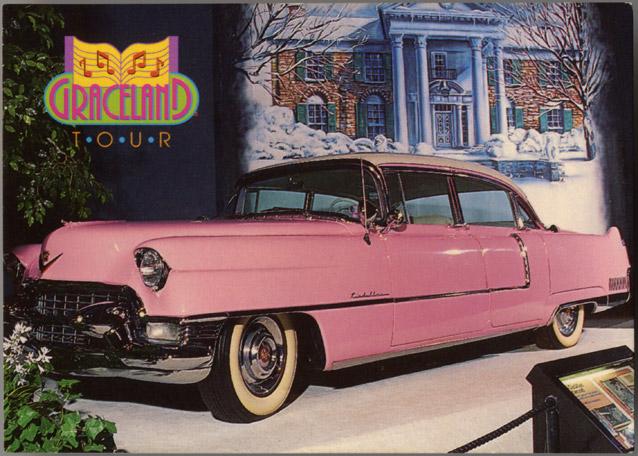 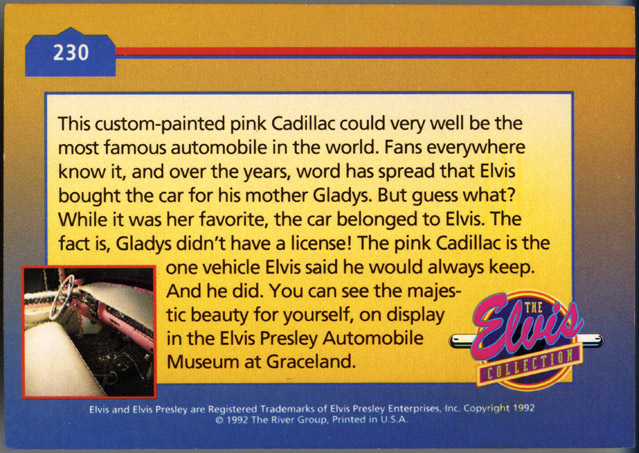 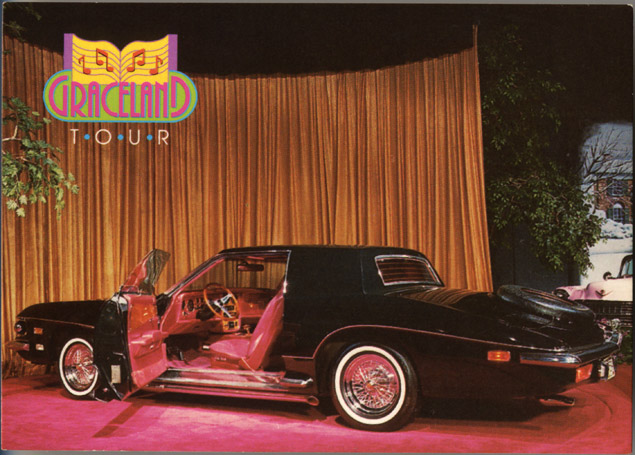 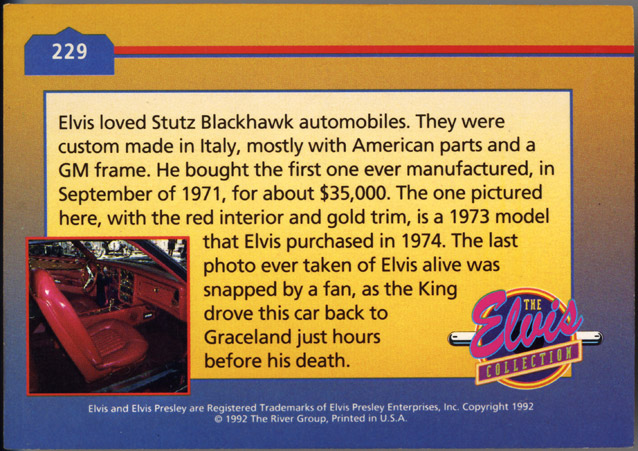 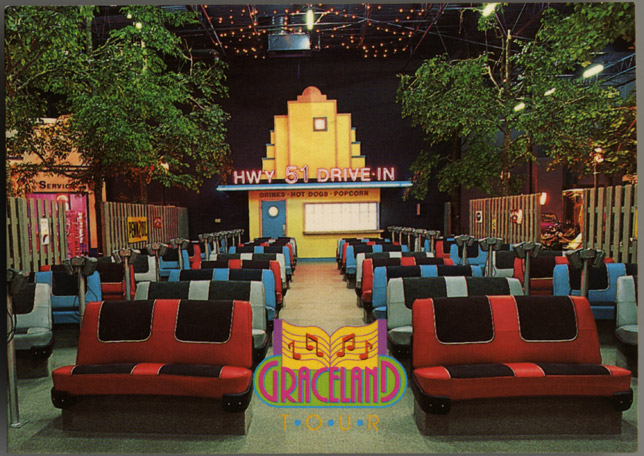 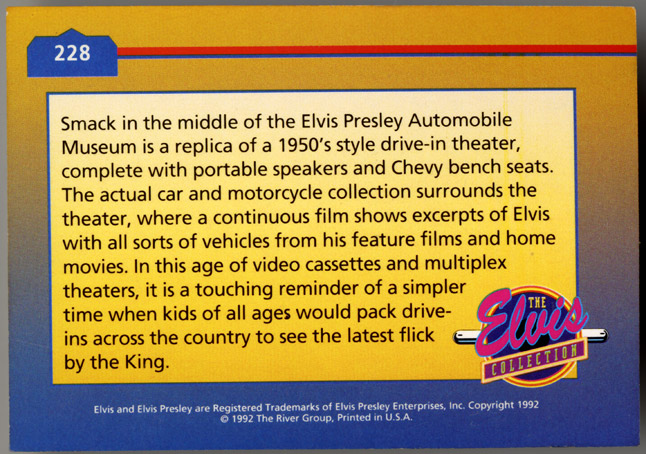 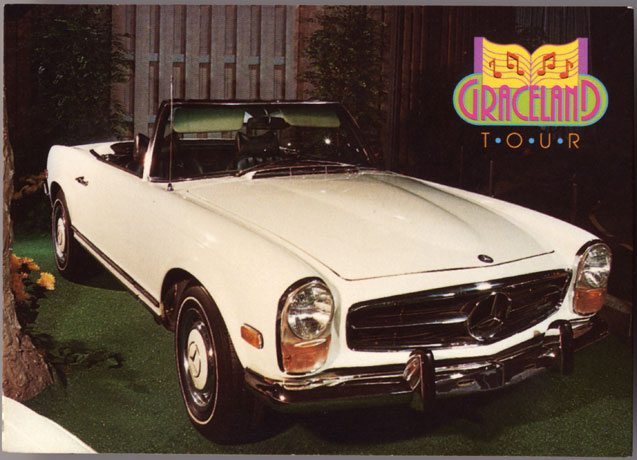 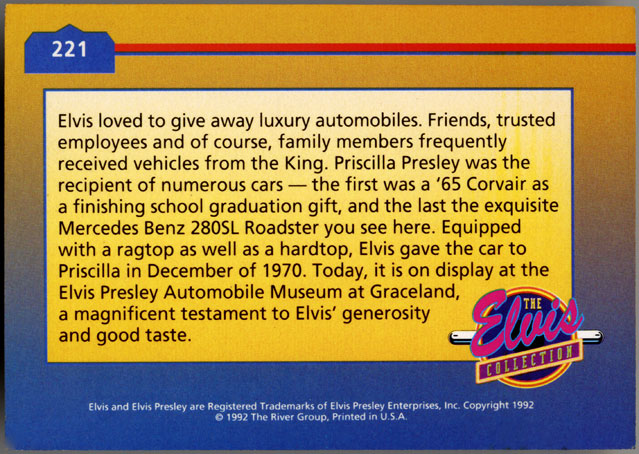 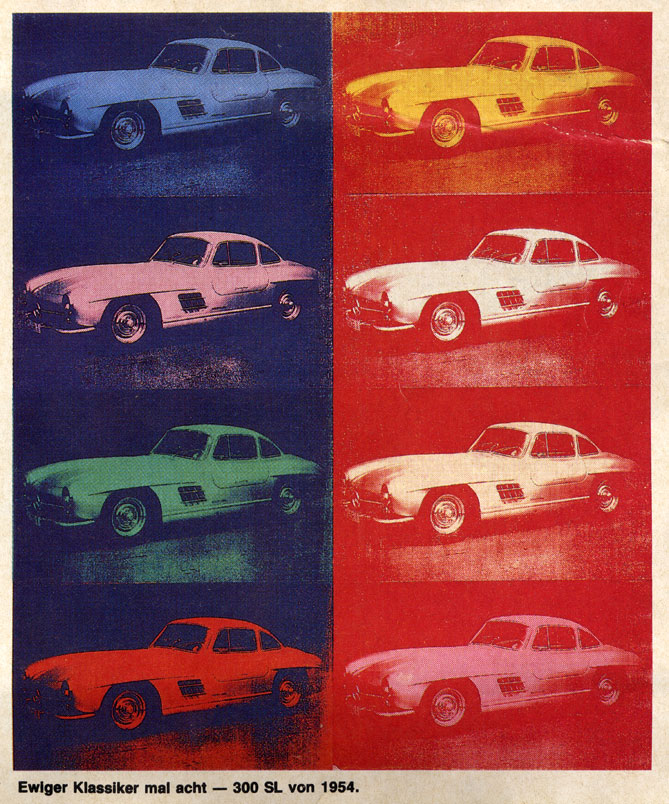 Cars is a series of artworks by the American artist Andy Warhol, commissioned by Mercedes-Benz in 1986.